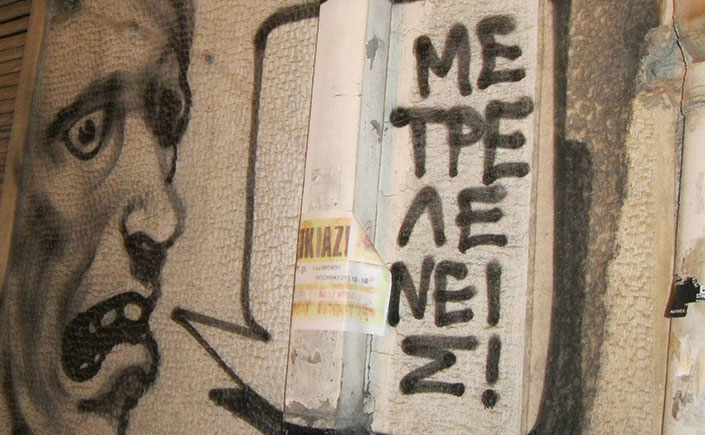 As with so many others I lived the gradual changes in Athens during the country’s not-so-gradual fiscal demise, as the city became a new and extraordinary site of collective grief and rage. The city’s walls in particular, and its surfaces more generally, expressed polyphonies of resistance, complaint, subversion, and humor. It was also changed by the ways the homeless and unemployed became everywhere visible and visibly bereft in their desperate and brutal refrains of need. So it wasn’t surprising that these voices and the city entered me like a haunting, a reverie of confusion and a dreamscape of the trauma and desires that made up the everyday of our lives as the social fabric of the world we had known before 2010, came apart.

These poems are from a working manuscript titled “A History of Too Much”.

Adrianne Kalfopoulou lives and teaches in Athens Greece where she is Associate Professor of Language & Literature at Hellenic American University/HAEC. She is the author of two poetry collections, scholarly work on Sylvia Plath, and most recently a collection of essays, Ruin, Essays in Exilic Living (Red Hen Press, 2014). Samples of her work, reviews & posts can be found at: www.adriannekalfopoulou.com

The Startled Dreams of the Fallen in Spring

The spinach leaves are startling, the sun too
finally strong after the grey days and weighted blues.
The sun and the spinach greens startling
like the waft of scents coming down from the mountains
in carpets of lavender from the Easter trees,
Paskalies and their aroma, and these colors startling
over our broken pavements, our streets where the homeless sleep.
But the brown hours of winter, the chill still in our dreams
wake us, startled – I am not sure if this is
the pollen of sleep or the difficult breathing of spring?
After so much grief, the darkness has seeped into our dreams.
I see a gold-flecked bird, a ladder against a wall of vine-greens.
And on waking I remember the strange Lucite,
the climb to the child that startled me as I carried her down
to the ground, scents of the darkness and moist trees
kept me from falling with the girl in my arms.
I came down a Lucite rung at a time, fearing
like the thousands of fallen that I’d slip – I could see them
against the walls, on the dirt ground curled like caterpillars,
their dark-stemmed shapes over pavements, worm-like
in the midst of new greens. In my dream there were other shapes too,
a woman handing out clothes pegs ungenerously was startled
when I asked for more – she could only give me two that were green
as the air surged with lemon blossoms and a gold-flecked bird
perched above the unsaved, their hands and arms
stretched out from blankets like jutting twigs flooding me
with grief when V, a colleague, walked on ahead,
determined to out-walk the fetid scents. I kept telling V
she was walking too quickly, but this was a dream
and I couldn’t stop her, or the man holding a child in his lap
startling me with his soft-worded please,
the curly-haired daughter he was holding, asleep.
Another colleague quit trying to keep me from falling.
It was a great wind and I kept leaning forward
though he was relaxed and knowing while I, unsure
in the darkness, remembered B’s lavender sprigs
still pungent in my pockets though I was now falling
though I kept trying to close a door that wouldn’t close,
the gold-flecked pollen a dust on my lips
as my neighbor asked me “would you like some lemons?”
Yes I needed some lemons, though this man had recently died
he urged me to take them, their yellows lucent, startling,
more startling than anything I had dreamed.

The Evening the Referendum was Repealed

“The metro gates are down?
There was no announcement of a strike.”
Someone lights a cigarette.
“The usual” someone else shrugs, and starts to walk
“at least this gives us a chance to talk.”
The parliament windows are lit
as if it were Christmas though it’s because
the country’s fate is in the balance,
because armed guards
cross the street with shields.
The city’s been shutting down for two years.
Even the protestors are fed up,
one with his face smeared white
to keep the tear gas from stinging
sighs “this revolution’s getting tiring.”
Someone laughs and he nods,
the revolution has become a kind of joke.
Graffiti-smothered walls tell us
FUCK THE EURO. FUCK THE IMF.
For some reason these two scrawls
have not been washed off.
Revolution is a sacred word
in Greece, it means there are always ways to resist,
the Greeks were good at this
they resisted Mussolini,
they delayed the Nazi expansion.
In the end the war continued for everyone.

We woke almost excited
though not with joy, wakeful like an animal alert
to a danger it cannot see, but can sense

in the tension of the air those days we walked
straighter than usual, aware of the
smallest movements, the drug addicts leaning

into each other as if their spines had collapsed,
someone scratching at a scab. Unlike them
we kept walking

ignoring our hurt, the garbage stench
like a rotting cat, trash piled up from the strikes
those days the refugees from Africa

could not spread their wares
as the pavements gathered the party youth
who hung their banners from statues and trees.

for communist hopes and sung the lyrics
of Ritsos, the songs and ballads
of Theodorakis, though today we think of those days

they are desperate, with families. Today
it will take a small miracle to save us, we know
it’s not enough to do our duty, pay bills…

“Those days…” we will say if we are lucky
to grandchildren and young friends, “people died in Greece
not because of war, but because
some didn’t see the enemy, or recognize them in time.”

While things were happening very fast, and people were talking
all the time, sometimes yelling when there were protests —
people shouting to move out of the way when a Molotov was tossed,
a smashed window pane splintered — we tried to slow down our thoughts,
we tried to think through each piece of the news as if
we were chewing on food that was difficult to swallow.
It was strange, too, how carefully we walked over the broken glass
as if these shards were precious, as if scattering them could hurt
the already scarred asphalt. It was strange because there was so much
glass to walk over that some days you forgot it was glass —
you imagined yourself in a gale storm ripping through
a country, scattering everything so that nothing was where it used to be,
nothing left unhurt. The storm ate through sturdy buildings
even the stones of pavements, you could see the iron insides
of what kept things in place. We felt suddenly very small,
the way someone feels in a gale storm, and the larger and more bold
the news headlines, the smaller we felt, even the pitch of television
voices shrunk us, things like getting out change for the metro
or looking at fallen leaves on the curbside took a long time, we kept
looking at those browns, the strange, crushed greens, the veined skins,
and forgot we were standing in that small space of ours.

The ruins urge you to “find another city,”
look for another shore. Even the broken finger
of a still white statue in the park points
westward. You could take that advice,
travel, find your way far from the hungry,
the shut-down stores, hope for another life.
But you’re mesmerized by the ignited people
and that priest or bishop in the park
missing half his finger (who knows what his story was,
a thrown rock aimed for the statue’s face
hit his raised hand instead?) – they won’t leave you,
the gouged marble, the graffiti scrawls,
the statue standing like something outraged
remind you, you who yearned to live beyond this,
that hope marked you too.

The quoted line is from A.E. Stallings’ translation of Cavafy’s “The City”

The History of Too Much

There is too much here, the sapphire, the thistle,
the oregano blooms in June, everything extravagant –
the rich peat of what decays, the ruins that don’t decay,
these especially are too much, the temples and statues
in their stark marble glow, that simplicity which is not simple at all.
This sheen of time, the wear of wars, the famine years
of Occupation, lucent as the columns standing stoic, Doric –
their weight has whittled the people: the weight of that antiquity,
of those stones, the grandeur and pride – too much
in this moment, this present crushed by the violence,
the result of living with beheaded gods, and maimed, still
beautiful torsos, the muscled limbs in chipped robes.
They plague our dreams, what was once achieved is now
incomplete, these pieces of the golden age aging
in the midst of traffic, too much, the yelling and honking,
the protests in the middle of everything – people are impatient –
how can anyone be patient, overwhelmed as they are.
Even the oregano’s thick perfume, the sapphire sea,
remind people of extravagant loves and sacrifice, while here,
now, ghosts live on as gods and their impossibility.